After a Cruel Start, Flora Blossoms

After a Cruel Start, Flora Blossoms

When ASPCA volunteer Sarina T. and her boyfriend Alex S. decided to foster a pit bull puppy named Flora, they knew little about the young dog’s background, except that she had a heart infection, which was being treated with antibiotics.

“She has some scars and patches without hair, but beyond that you would never know she was anything but a healthy puppy,” recalls Sarina.

Just four months earlier, on November 14, Flora arrived at a New York City veterinary hospital with her previous owner who reported a wound on one of her back feet.

But emergency veterinarians could immediately see Flora’s condition was far worse. The five-month-old puppy was so emaciated that she looked like a walking skeleton, weighing only 9.9 pounds. 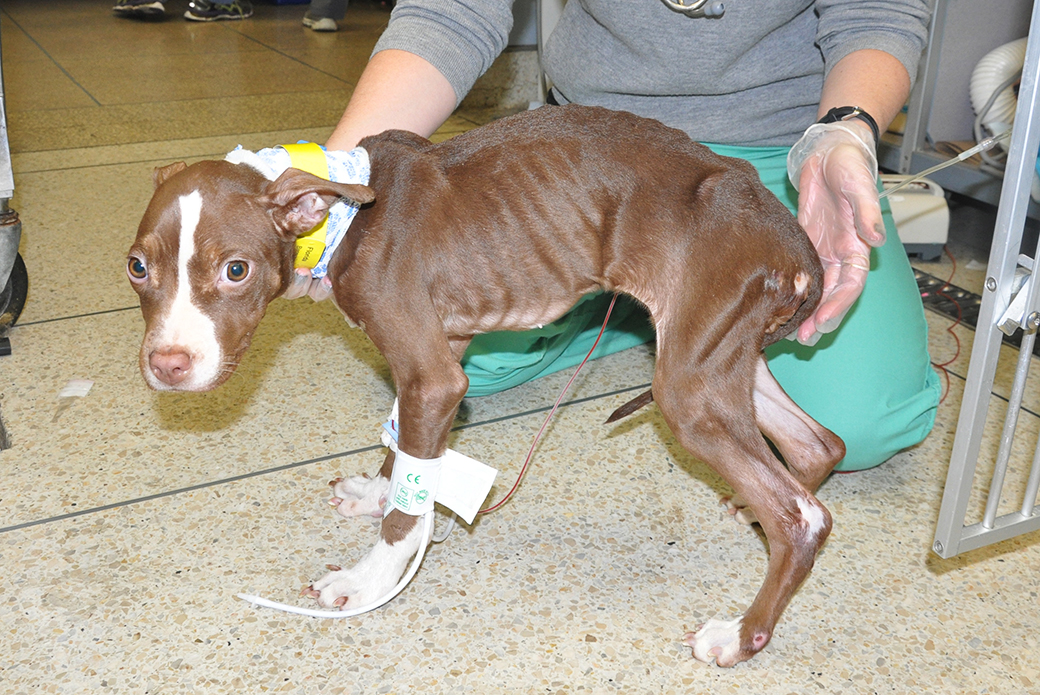 Flora was emaciated when she was arrived at a local veterinary hospital.

Upon further examination, veterinarians noted Flora’s body temperature was 12 degrees below normal for a dog—90.1 degrees Fahrenheit—and her gums were pale. She had a heart murmur, low blood pressure, a weak pulse and anemia—the result of bleeding ulcers in her gastrointestinal tract. Open wounds on the back of her left heel and a deep, scabbed, chronic wound over the back of her left hip contributed to her blood loss. She was in shock and severely dehydrated, and melena in Flora’s mouth was evidence she had ingested her own feces.

Initial blood work did not reveal any underlying disease or illness to explain Flora’s emaciated body condition and severely compromised medical condition, but she was so starved that she had used her own fat, muscle and organ tissue for nutritional needs and would have died without urgent medical intervention. 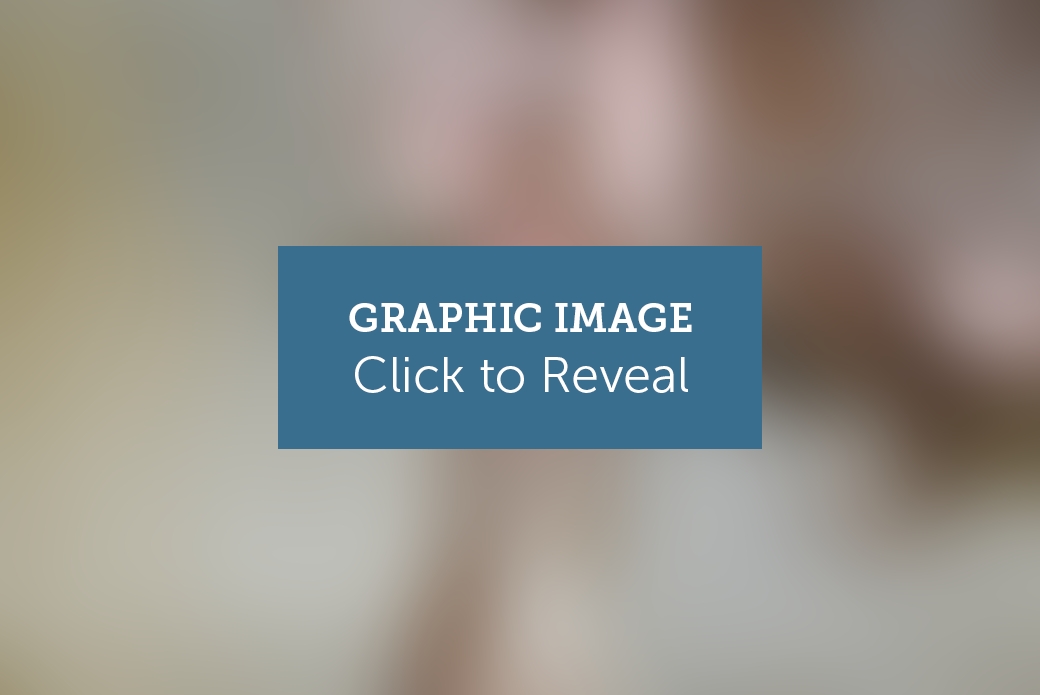 Flora had pressure sores and chronic wounds, including one on her left heel.

“When I met Flora, she could only stand with support,” recalls Dr. Niestat. “I’ve seen many emaciated animals, but Flora was one of the most severe cases ever.”

Flora was fed according to a specific protocol to prevent re-feeding related illness, a potentially fatal complication which can happen if an undernourished animal is overfed immediately following a time of prolonged inadequate nutrition.

“A dog’s body needs time to transition back to a normal metabolism,” says Dr. Niestat. “The goal during this time is for the dog’s body to ‘relearn’ how to use food.”

Flora’s re-feeding continued over the next two weeks while she remained hospitalized and veterinary staff continued her supportive care.

A Slow Crawl Back to Health

Initially, Flora ate well and slowly improved, but days later, she developed a cough and her condition rapidly deteriorated. She had a fever and was lethargic, refusing to eat. An echocardiogram revealed changes consistent with bacterial endocarditis, an infection of the inner lining and valves of the heart. Additional antibiotics were initiated to treat this infection.

On November 27, a now 13 lb. Flora was transported to the ASPCA Animal Hospital (AAH) for continued care and monitoring under Dr. Niestat.

Flora gained weight rapidly and by mid-January was up to 25 pounds.

Over the next few months, Flora flourished, recording astonishing month-to-month weight gains. Whereas most puppies Flora’s size would experience a six to 13 percent weight gain, Flora’s weight climbed by 86 percent during one period.

“Flora made up for lost time by gaining weight faster than would be expected,” says Dr. Niestat.  “It really was amazing.”

Because Flora’s heart infection required several months of antibiotics, ASPCA staff found her a foster home so she could continue to heal.

Enter Sarina and Alex, who began fostering Flora in March.

Flora thrived in her foster home, which later became her permanent home.

“We were thinking about fitting a dog into our life,” Sarina explains. “We thought fostering would be a good way to try it out.”

Sarina says Flora was cautious around them when they first brought her home. “It’s like she wanted to interact with us but just didn’t know how,” Sarina recalls.

But Flora’s personality and confidence soon blossomed. She made friends with her new neighbors, both animal and human, especially children. “Within a month, she was snuggling up to us—always wanting to be held and sitting on our laps,” says Sarina.

A Home at Last

At Flora’s re-check on June 6, there was no further sign of endocarditis, revealing a good long-term prognosis, and Sarina and Alex officially adopted her.

Flora eagerly plays with other dogs at her local dog park, trying to get them to chase her. She loves tennis balls and has learned commands like sit, down, roll over, spin, touch and shake. She also likes to look out the windows of her Chelsea home, which overlooks a nearby playground. 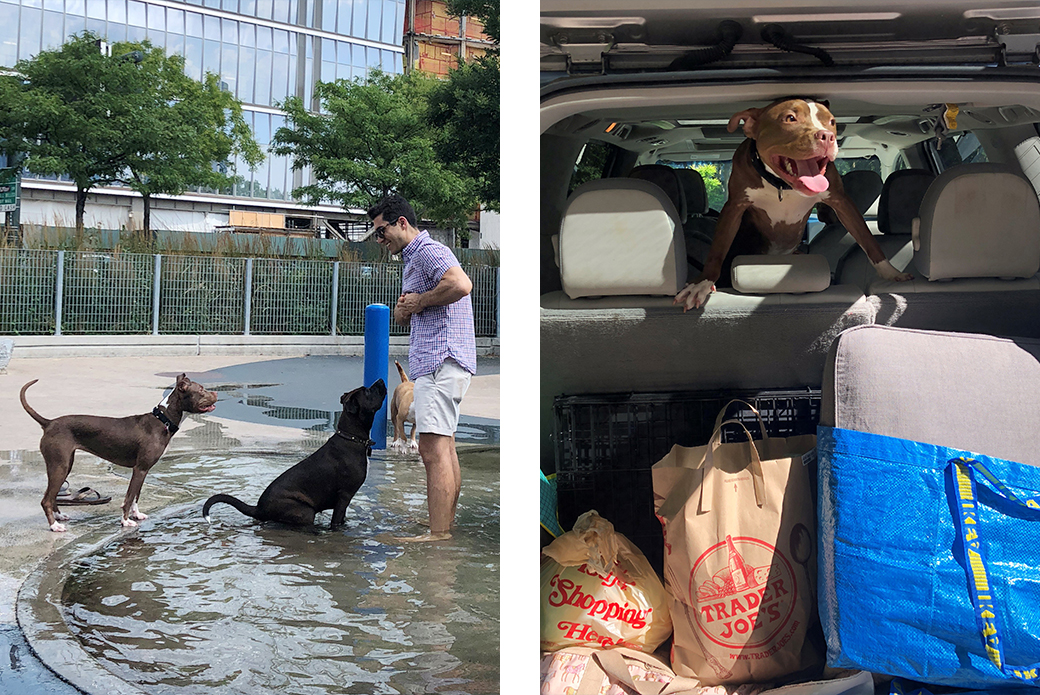 Flora at the dog park with Alex, left, and right, after a shopping spree.

“She spends a lot of time observing things,” says Sarina.

Now a stout 45 lb., Flora is a long way from her cruel past, both physically and emotionally. 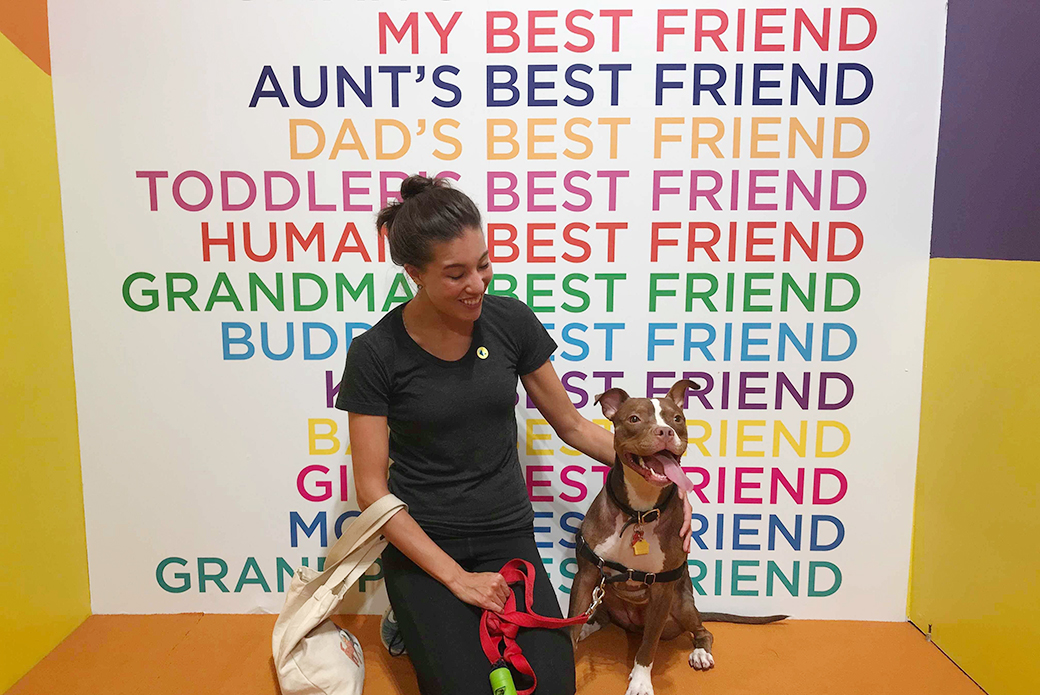 Flora and Sarina pose for a photo at a local charity event.

“I think it’s incredible that Flora doesn’t have any animosity or distrust,” says Sarina. “She is so sweet and resilient. We’re fortunate to have her in our lives.”

Teaching Cats Defecate in Place
Netizens thrilled with imploring eyes of a cat in slaughterhouses
PUPDATE: Chance The Dumpster Dog Finds His Home For The Holidays!
Picture Worth a Thousand Words: Eulogy for War Correspondent
A Bengal’s Life in Action
This Guy Has A Whole PACK of Pitties At Home … Now He’s Saving Them All Over California!
NYC Woman Reunites With Dog Three Years After She Went Missing
Google Cat – Here’s Lookin’ at You, Kitty
CORGI WHO LOST HER LITTER ADOPTS KITTEN
CAT HITCHHIKES FROM SOUTH CAROLINA TO MAINE
The Benefits of Walking Your Pet
Black Cat Appreciation Day Is This Friday!
Informal vs. Formal Arrangements
Don’t Fall for Fake Mews: Get the Fun Facts about Fostering Kittens!
We Need Your Help to get Bunny Hopping into a New Home
A Pug’s Life: ASPCA Gives T-Rex a Fresh Coat

EVER THOUGHT ABOUT ADOPTING A BEAUTIFUL GREYHOUND? NOW’S THE TIME IN FLORIDA, AS MANY WILL BE LOOKING FOR LOVING, FOREVER HOMES….

Imagine Coming Home to Your Cat’s Jaw Stuck Like This

Tips to Have a Happy Cat

Heartworm In Dogs and What You Should Know

Regular Vet Checks for Your Cat

Why Is My Dog Peeing on the Bed?

A Veteran Fights to Save his Service Dog

Chronic Renal Failure Pt. 2: Treatment, and Managing the Symptoms of…

dogcat Sep 14, 2017 0
What is the IQ Option, how to register and open account IQ Option How To Play IQ Option To Achieve Greatest Profits…

How to play IQ Option – Experience extremely useful sharing of…