For cats rescued from hoarding situations, behavioral care is often as important as immediate medical care. That was certainly the case for Winky, a shy six-month-old brown tabby who was rescued in Staten Island.

Winky was one of 17 cats relinquished to the ASPCA last February by an overwhelmed caregiver, according to Lisa Kisiel, ASPCA Community Engagement Case Manager and the lead on Winky’s case.

Winky’s former caretaker hadn’t interacted with or socialized him. The kitten arrived to the ASPCA Adoption Center suffering from extreme fear and anxiety.

“He was shut down and scared, and wouldn’t eat,” explains Marny Nofi, Senior Behavior Manager for the ASPCA’s Anti-Cruelty Behavior Team. “He just shook in his cage.” 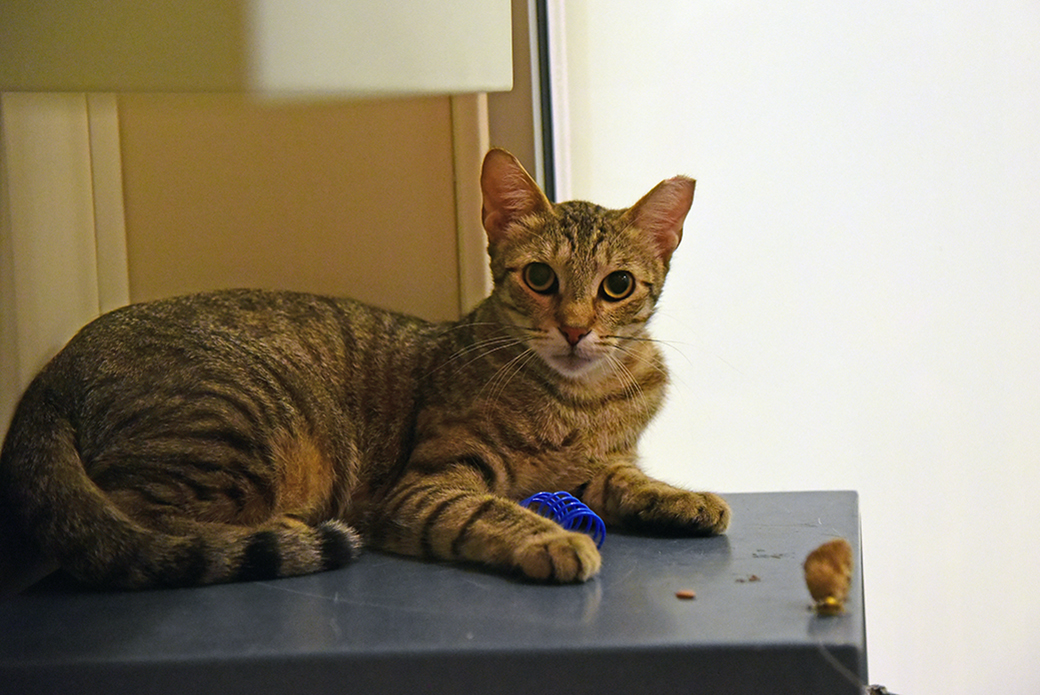 To help Winky learn to trust interactions with people, Marny’s team placed him with an ASPCA office foster caregiver.

“We often consider changing an environment to see how fearful cats may progress,” explains Marny. “Going from a cage to an office, where they won’t feel cornered, can make a big difference.”

In this time, Marny’s team learned that Winky was motivated by toys and food. “We used both to get him comfortable with handling,” she says. “The key to working with fearful animals is pairing something mildly scary with something they find rewarding. This helps them associate the scary thing with a positive experience.” 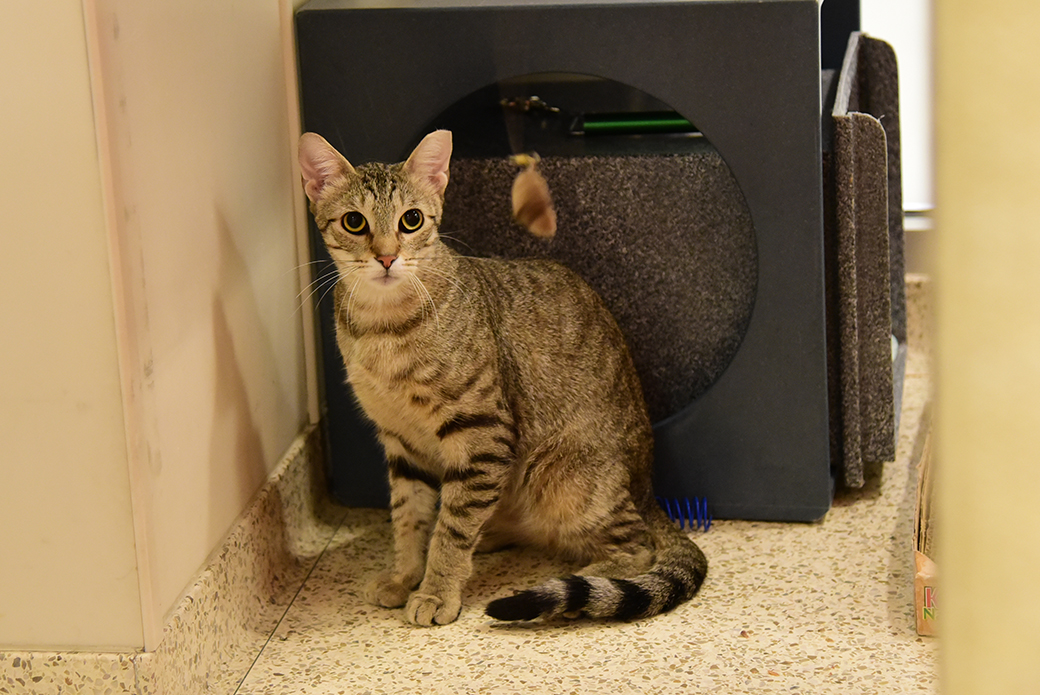 “If he touched his nose to our hand, we’d say ‘yes’ and give him a treat,” Marny explains. “As a result, he learned that making contact with a person made good things happen, so he wanted to do it more. Giving Winky access to those rewards revealed a cat we hadn’t seen before.”

Winky’s big breakthrough came in April, when he went from touching his nose to their hands to rubbing his cheeks and head against their hands. From that point on, he continued to initiate physical contact with people.

The team continued their work for two more weeks, focusing on making petting and handling even more positive experiences.

“Being young—just six months when he arrived at the ASPCA in February—helped Winky come around sooner,” Marny says. “The optimum socialization period for cats is approximately three to seven weeks of age, and exposure to new and novel things during that time makes a huge impact.”

After some initial nervousness, Winky eventually joined other cats in a habitat in the Adoption Center to help him gain even more confidence as well as space to retreat or hide if he wanted. After being deemed fit for adoption, he was spotted by Mia D. and her husband, Michael H., of Queens, New York,  during their visit to the ASPCA on May 19. 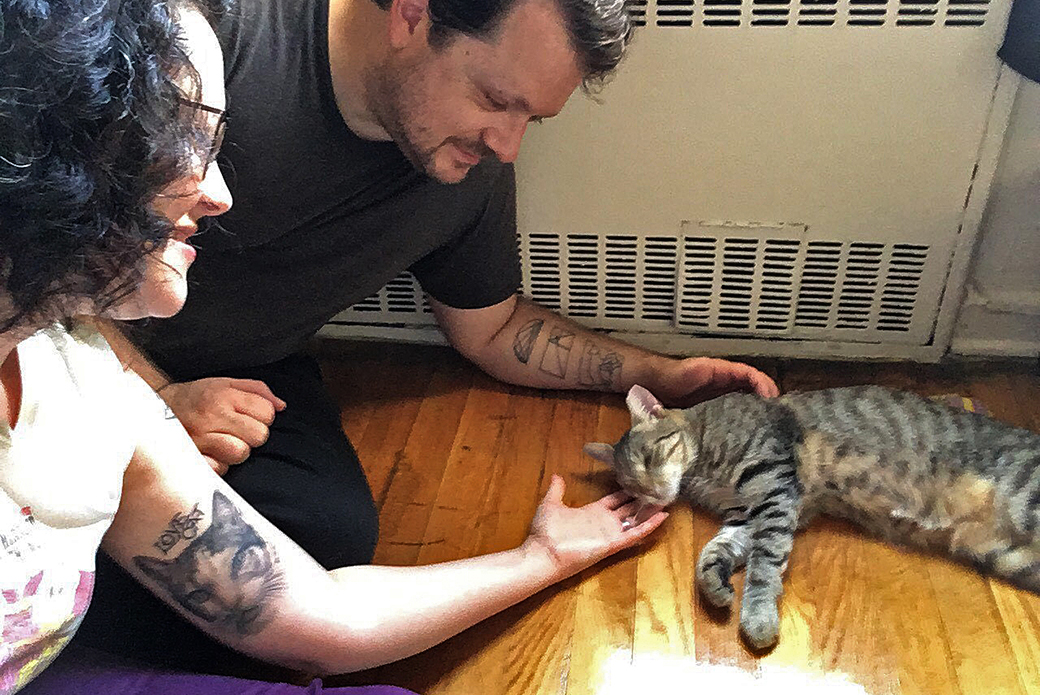 Mia, who had adopted an older cat seven years before from the ASPCA, said the couple wanted to adopt a cat whom others might overlook. They spotted Winky hiding under a perch. When he came out and sniffed their hands, a strong connection was made, and a once-at-risk animal was given a precious second chance.

“He was really sweet, and we felt he was the right one for us,” explains Mia. They adopted Winky that day.

Predictably, Winky was quiet for the first couple of days after going to his new home. 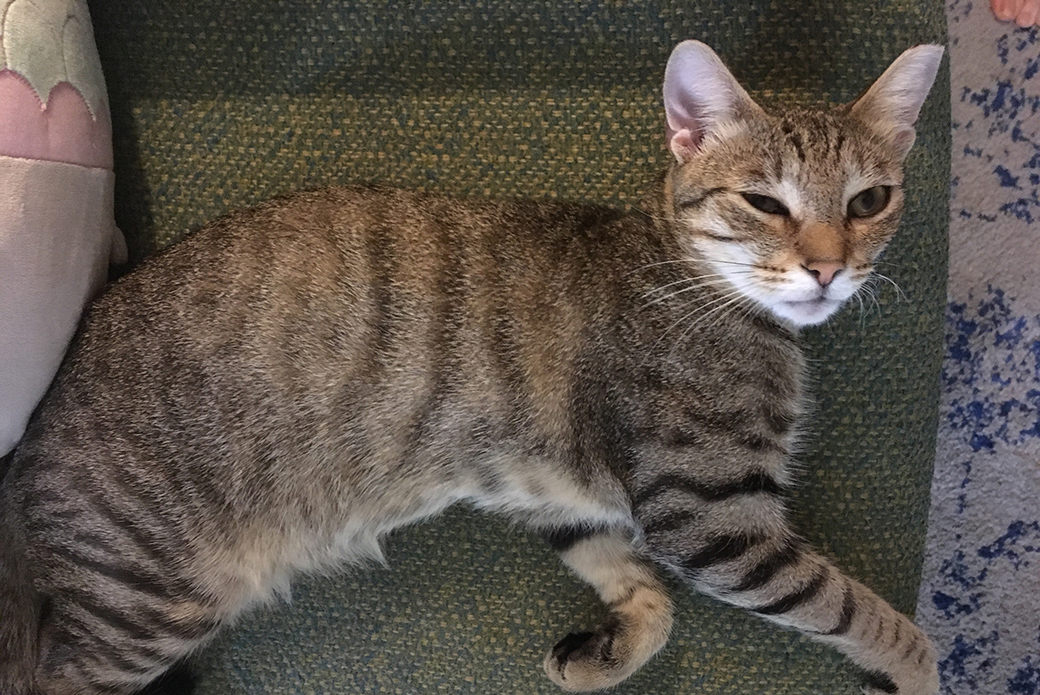 “He hid between the shower curtain and the liner in the tub,” says Mia. “As he came out and explored, we discovered he likes to talk. We’re learning each other’s cues. He loves belly and chest rubs, and lets us touch his paws. He has really come out of his shell.”

Winky has a new name to accompany his new personality—Ishi—which means both “stone-colored” and “orphan” in Japanese.

“He was an orphan once,” says Mia, “and his coat is the color of stone, so we thought ‘Ishi’ was appropriate.”

Mia reports that Ishi is crazy about food. “He’s smart—he’ll bat at your hand for more treats and understands a flat hand means ‘empty.’” He also “bunny kicks” his favorite toy—a kong kickeroo. 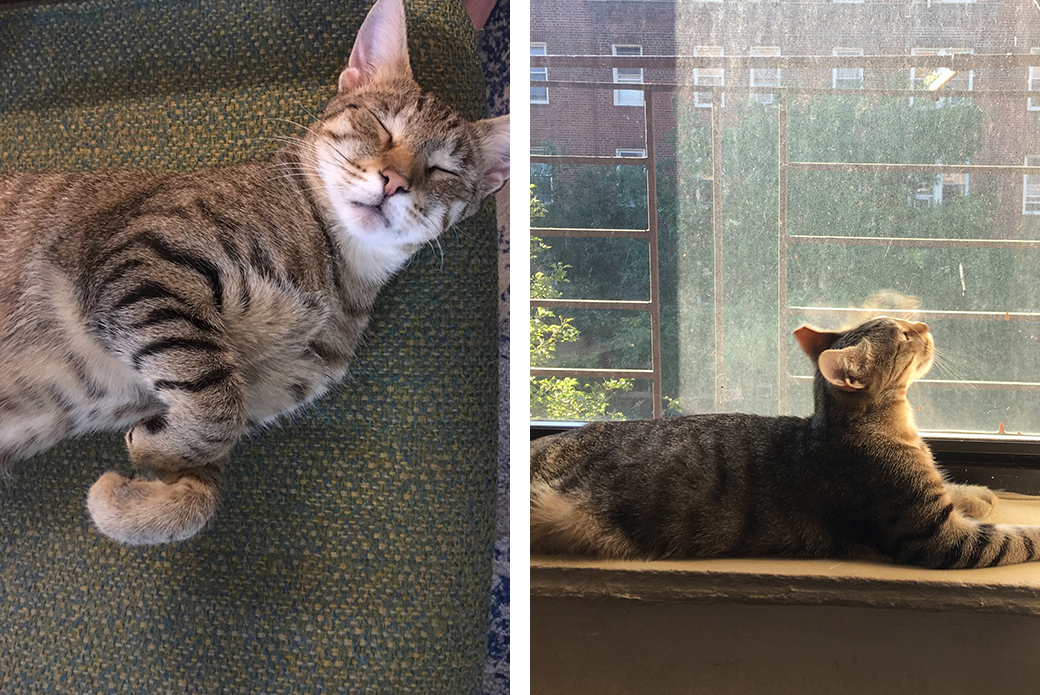 “While he once wanted love but was conflicted about how to get it, he no longer runs from it,” says Mia. “He greets us when we get up in the morning. He asks to be fed and comes to us for affection.”

Now free from his past, Ishi has become the pet he was always meant to be.

“We couldn’t be happier with him,” says Mia.

ASPCA Deploys to Assist Animals and Communities in Storm’s Path

Obesity in Cats. Is Your Cat Overweight?

dogcat Jan 15, 2018 0
Cats love lying in sunbeams or on a soft cushion, but a sedentary lifestyle isn’t good for their health. Obesity…

Make Your Howlidays Bright with these Purrfect DIY Gifts!

It’s Spring! Here are 9 Things to Watch for and Keep Kitty Safe

dogcat Sep 23, 2016 0
What is the IQ Option, how to register and open account IQ Option How To Play IQ Option To Achieve Greatest Profits…

The Tips Are Never Beneficial When Playing The IQ Option