Four months ago, Nala was celebrated as the 1000th kitten to cross the front door threshold of the ASPCA Kitten Nursery in Manhattan.

Today, the six-month-old cat—now named Finn—is a beloved family member in the home of Jamie S. and Sean H. of Worcester, Massachusetts.

“We’d been looking for a kitten for a while,” says Jamie, who browsed the website of Second Chance Animal Services in East Brookfield, Massachusetts, searching for a new pet. “When I saw his photo, he had the saddest kitten eyes. I said, ‘That poor baby, he needs a home.’”

Jamie and Sean then visited the shelter on September 22.

“We played with a couple of other kittens, and my husband said, ‘You haven’t even played with the one you wanted,’” Jamie recalls. “Finn was all by himself, and when I picked him up, he curled up in the crook of my neck and started purring. Right away I said, ‘This is the guy!’” 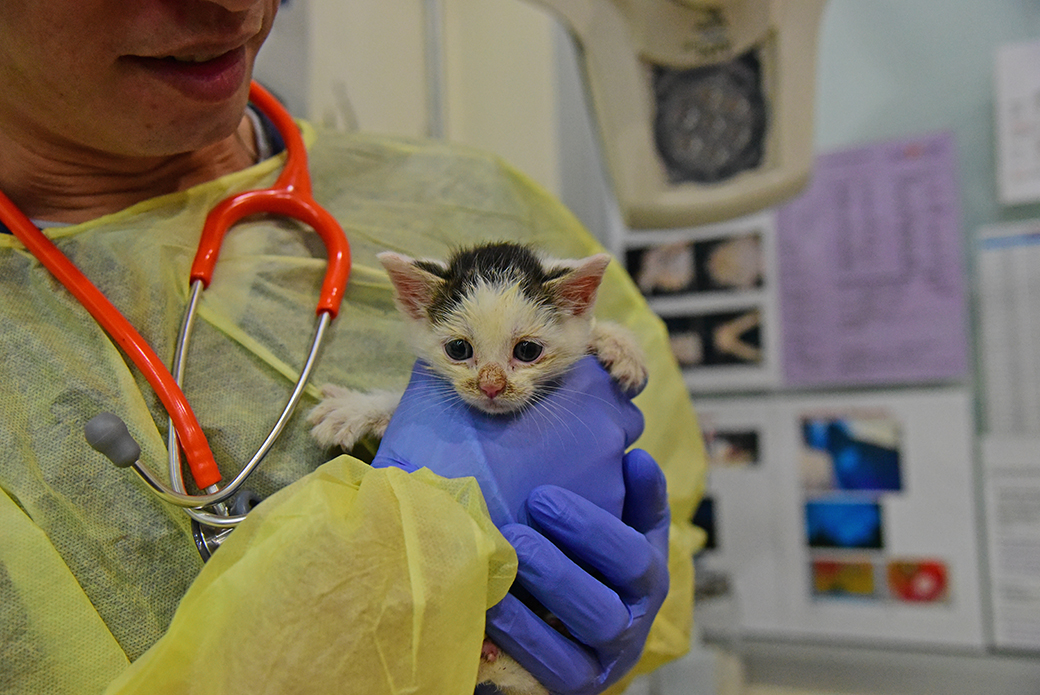 Finn was just three weeks old when he was found as a stray in Queens with his sister Nina. Both were brought to the ASPCA Kitten Nursery on July 15 by a Good Samaritan. Dehydrated and suffering from diarrhea, the kittens were placed in a foster home until they recovered and were old enough to be spayed and neutered.

Around Labor Day, the kittens were transported to Second Chance Animal Shelter, one of several ASPCA shelter partners that routinely accepts animals from the ASPCA and places them up for adoption.

“The abundance of kittens can cause an overflow of cats in our Adoption Center, and we want to prevent that bottleneck,” explains Cheryl Fazio-Hardwick, the ASPCA’s Transport Manager. Cheryl coordinated the transport of 181 kittens to less crowded shelters in Maine and Massachusetts during this year’s kitten season.

Wendy Hall, Animal Relocation Director at Second Chance, recalls the fuzzy felines as very sweet. “And it wasn’t long before they were adopted,” she adds. (Nina was adopted by another family one week before Finn.)

“It’s an amazing feeling when our kittens get loving homes,” says Karina Josenhans, Logistics Coordinator for the ASPCA Kitten Nursery. “We couldn’t be happier knowing where Finn is now.”

In his new home, Finn adjusted quickly. He was excited to meet Jamie and Sean’s other cat, two-year-old David—named after the actor David Duchovny. The couple introduced the two kitties carefully at first.

“Finn loves David,” says Jamie. “David puts up with him and he’s pretty patient; they play a lot.”

Finn also loves curling up with Jamie, who has had cats since she was four years old.

Jamie reports that Finn is very friendly, even to visitors—a testament to the healthy socialization he received from his foster caregiver as well as staff and volunteers at the ASPCA Kitten Nursery.

Finn can also be mischievous and has tackled more than one roll of paper towels.

“He does have one funny quirk,” Jamie reports. “When he’s eating he purrs and kneads the food. He must know that food is comfort.”

Finn will never know he was once honored for a milestone moment, but finding a safe and loving home will forever be his most meaningful accomplishment.

The cat cried horizontal plane engine
Dogs "begging" cool in the Philippines
Celebrity Doug the Pug has Adorable New Feline Sibling
Abandoned Philly Dog Named for Rocky’s Fighting Spirit After Being Left to Die
Forecast calls for shedding! Dog casually strolls through live weather report
2-Legged Kitten Knows How to Get Around
FAYE NEEDS A FOREVER FAMILY. AND HER MEDICAL COSTS WILL BE COVERED FOR LIFE. THAT’S A GREAT DEAL ON ...
SPITFIRE THE WHIPPET MAY BE THE WORLD’S GREATEST ATHLETE. AT THE VERY LEAST, THE WORLD’S GREATEST ON...
Brave, Disabled Dog Awarded the 2018 ASPCA Dog of the Year Award
Black Cat Appreciation Day Is This Friday!
Haku the Cat Was Broken—Here’s How He Was Put Back Together
You Can Join Team Lucy and Honey Nut Cheerios to Support the ASPCA!
Adoption Tips
Is It Safe for Your Furry Friend to Join You Poolside?
Former Cruelty Victim, Apple, Gets Her Best Day Ever!
Is It Ever Safe to Induce Vomiting?

10 Reasons Why You Should Feel Proud Right Now

Does Your Cat Need to Drink More Water?

Why Does Calcium Supplement for Dogs ?

Puppy Is Fighting for His Life After Being Poisoned

What the Government Shutdown Means for Animals

The secret to successful dog training

dogcat Nov 30, 2018 0
Top Five Tips for Flying with Your Pets Nowadays, more than ever, pet parents are choosing to travel with their…

3 Vital Tips To Train Your Cat

How To Prepare Your IQ Option With The Skrill E-Wallet