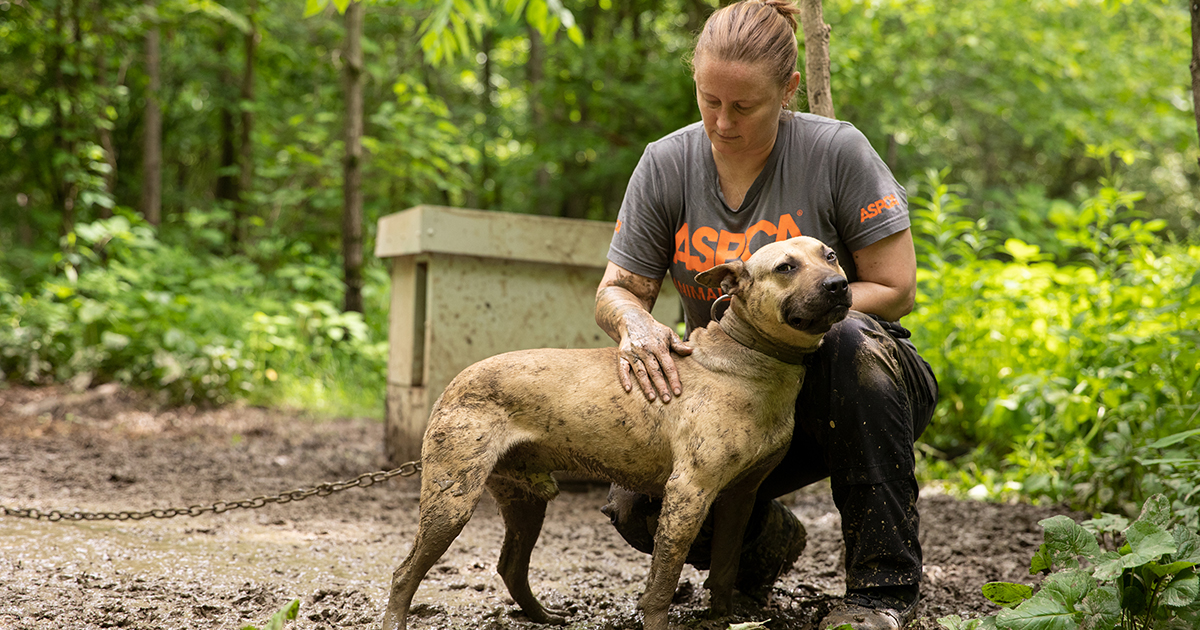 At the request of the Indiana Gaming Commission (IGC), the ASPCA is assisting with the removal of nearly 600 animals – including multiple dogs and more than 550 birds – from two properties in Morgan and Owen counties that are connected to alleged animal fighters. The ASPCA is also assisting local authorities with evidence collection, medical assessments, and veterinary forensic exams.

Search warrants were executed by IGC, and officials discovered the animals living on two properties. The dogs were found tied to heavy chains and housed in a manner consistent with dogfighting, while roosters were found with physical alterations commonly associated with cockfighting. Animal fighting paraphernalia was also discovered on the properties.

“Animal fighting is one of the most heinous forms of animal cruelty, and sadly it is far more common in the United States than many people realize,” said Jessica Rushin, Senior Manager of Partnerships, ASPCA Field Investigations and Response. “To betray animals by forcing them to fight for their lives for so-called entertainment is despicable. We’re proud to work alongside the Indiana Gaming Commission to remove these dogs and birds from pain and suffering, and hold those involved responsible.”

“There’s no place in Indiana communities for animal fighting and the illegal gambling that goes with it, and we are very pleased that we were able to shut down this operation,” said Superintendent Rob Townsend of the Indiana Gaming Commission. “This investigation started with a tip from a concerned citizen to Crime Stoppers, and by raising more awareness about this type of activity we see an increase in reports from the public that better allow us to tackle animal cruelty in our communities.”

The animals will be transported to temporary shelters at undisclosed locations, where they will be cared for by ASPCA veterinary and behavior experts until custody is determined by the court. The ASPCA’s Legal Advocacy department will work closely with law enforcement and prosecutors to ensure the best outcome for these animals.

The following animal welfare organizations provided the ASPCA with volunteers to assist with this case:

The ASPCA has assisted the IGC with multiple animal fighting investigations in recent years. In Indiana, conducting an animal fight and the possession of animals for fighting are level 6 felonies, each punishable by six months in county jail to 2.5 years in state prison, and a potential maximum fine of $10,000.

The ASPCA deploys nationally to assist local authorities in animal cruelty cases, as well as disasters such as hurricanes, wildfires, and tornadoes. We also provide local communities with resources including grants, training, and expertise to effectively assist animals during cruelty and disaster situations.

To support all our efforts to save animals’ lives across the country, please make an urgent gift today. Rescuing and protecting vulnerable animals is only possible with the generous support of our members. Thank you.

The charges outlined above are merely an accusation and the defendant is presumed innocent until and unless proven guilty in court.

Updated Safety Warning on Xylitol: How to Protect Your Pets

Diarrhea in Dogs: When to Worry

The secret to successful dog training

dogcat Jan 13, 2018 0
Diabetes is the most common hormonal disorder in cats. It can affect as many as one in fifty cats, and the…

Obesity in Cats. Is Your Cat Overweight?

How to Know When Your Cat is Sick