Since 2002, the ASPCA’s fleet of mobile and stationary spay/neuter clinics has provided high-quality, low-cost surgeries to tens of thousands of pet owners and rescue groups in New York City each year.

In July, the ASPCA marked a significant achievement by completing its 500,000th spay/neuter surgery, which took place at the ASPCA’s Spay/Neuter Clinic in Glendale, Queens. This facility is one of two stationary ASPCA clinics that deliver vital services to homeless dogs and cats being cared for by rescue groups, humane organizations, foster networks and the Trap-Neuter-Return-Monitor (TNRM) community.

A Passion for Protecting Animals

Emily P., who practices TNRM in parts of Brooklyn and Queens, brought the celebrated 500,000th client—a black kitten named Bertha—to the Glendale clinic, which she often visits with unaltered cats in tow.

“Since I was a kid, I’ve been passionate about rescue, adoption and spay/neuter,” says Emily, who began trapping and rescuing cats in 2015 when she was 18. “Once I learned about TNRM, it snowballed into what it is now.” 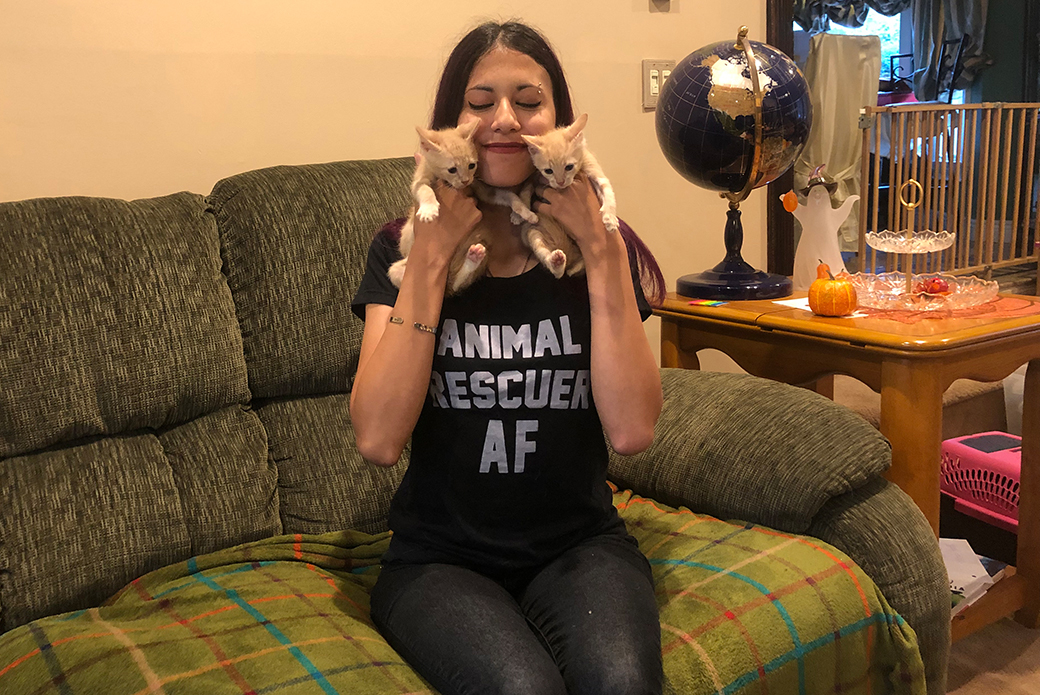 Emily with two of her foster kittens.

Emily, who manages a pet supply store and has three rescued cats of her own, estimates she has helped more than 200 cats and kittens and placed more than 100 into new homes. Some of the cats Emily brings to the ASPCA clinic are owned, but she returns community cats into colonies with caretakers and, with help from other rescuers, finds homes for cats who are socialized and adoptable.

Left: Emily gives kisses to a fospice cat named Pufty, who is sadly in congestive heart failure but living her best life with Emily. Right: Emily snuggles up to Miracle, a kitten who was dumped at her workplace just after birth.

Bertha, who was trapped and rescued as a sick bottle baby, has grown rapidly and is now known as “Big Bertha.” She was recently adopted by a family on Long Island who spotted her on social media.

Why Spay/Neuter Is So Important

“Spaying females and neutering males reduces the risk of prostate disease in male dogs and eliminates uterine infections and also reduces the risk of breast tumors in female cats and dogs,” explains Dr. Lori Bierbrier, the ASPCA’s Medical Director of Community Medicine in NYC. “Spaying/neutering is also highly cost-effective. The cost for a spay or neuter is far less than the cost of caring for a litter or the medical complications that can arise from not having the surgery.”

The quality of life of “community cats”—outdoor, unowned, free-roaming cats—is scant even if they survive kittenhood. However, community cats who live in a colony with a dedicated caretaker who provides spay/neuter services, regular feedings and proper shelter, have a much better quality of life.

The ASPCA endorses Trap-Neuter-Return-Monitor (TNRM) as the only proven humane and effective method to manage community cat colonies. It involves humanely trapping them, having them spayed or neutered and vaccinated against rabies, returning them to their colonies, and ensuring those colonies are monitored by a caregiver.

Recently, the ASPCA announced a multi-year initiative to build a network of Community Veterinary Centers across the city to equip underserved areas with greater access to basic veterinary care. The first ASPCA Community Veterinary Center is scheduled to open in the Bronx in late fall 2019, followed by Brooklyn in 2020 and Manhattan in 2021. Once they are operating at maximum capacity, the centers will enable the ASPCA to provide an additional 30,000 spay/neuter surgeries in New York City per year.

“If Bertha could talk, she’d say ‘thank you’ for saving me,” says Emily. “And she’d thank the ASPCA for helping stop the cycle of community cats breeding so this doesn’t happen to another cat like her.”

Bertha may have no idea what made her surgery so special, but she—and hundreds of thousands of cats like her—are living examples of how spay/neuter services and TRNM can beneficially impact animals, people and communities.

Cold viewers get drowned cat, butchered in Thai Binh province of Vietnam
Cat crossing your eyes suddenly became a star thanks to the lovely appearance
When cats pervades ... the famous painting
Said working dog house
Dogs "begging" cool in the Philippines
Cat Serial Poisoner Mystery Rocks French Resort Town
Pit Bull With Dwarfism Has The Best Dad Ever!
Why You Should Never Let Your Dog Eat “Grass” in the Water
Dog and Pony Show: Terrier and her BFF are the best thing you’ll see today!
HOUSE (RESCUE) PARTY! DOG STUCK BENEATH HOME FOR 30 HOURS FINALLY FREED
STUCK KITTEN UP TO HIS NECK IN TROUBLE
Clean Out Your Fridge on November 15!
Helping Winky Come Out of His Shell
General Cat Care
In a Nod to Valentine’s Day, U.S. Lawmakers Reintroduce the HEART Act
From Rescued to Regal: Our Top 10 Shelter Dog Transformations

Uncovering the Facts: Myths on Vitamins and Weight Loss Supplements

Dog Care Before, During and After Birth

Dogs Getting Downward, Upward, and Stretching

Why Are Dogs Always Thirsty ?

Regular Vet Checks for Your Cat

First Case of Bird Flu Spreading from Cat to Human

Oscilloscope AO – 3 Techniques for Techniques To Use This Index – How…

dogcat May 31, 2017 0
What is the IQ Option, how to register and open account IQ Option How To Play IQ Option To Achieve Greatest Profits…