Big Love for One Big Dog: How Lance Found His Match

Big Love for One Big Dog: How Lance Found His Match

When you see Lance now—coming in at just over 100 lb. with a big, goofy smile and tongue hanging out—you’d never suspect that he’d been anywhere other than with his current family. As Lance, his adopter Brad A., and Brad’s son Brendan all walk to their local park in Long Island City, the trio look like they’ve always belonged together.

But Lance’s story holds more weight than one might imagine when looking at the happy-go-lucky dog.

Life in a Shelter

We first met Lance in 2017, when he was transported to the ASPCA from a shelter in Mississippi. At the time, he was just a puppy—a very large puppy—but he was social and sweet, and employees at the ASPCA Adoption Center had no doubt that he would soon be adopted.

And they were right. Lance went home a couple of weeks following his arrival but was soon returned. This pattern would continue three more times, with adopters having various reasons for returning him such as behavior issues, changes in lifestyle and allergies. By the time we met Lance again on his fourth return, he was a large, 10-month-old dog. But it was clear that despite his size and growth, no one had taken the time to really work with Lance and help him develop into a mature dog. And couple that with being taken back and forth from different homes to the shelter—this all took a toll on the large boy, and his behaviors made it difficult for potential adopters to really see him for the loving dog he is.

“In the shelter, he got to be a dog, but it’s still not home,” says Alfonso Sawadan, an ASPCA Behavior Specialist who worked with Lance. “They don’t get to relax 100 percent as a dog would normally in a quiet home, so that is a challenge in itself. But happening four times over, I’m sure it took its toll on him.” Alfonso and the Behavior team continued to work with Lance while he waited to be seen by the right adopter. Specifically, they worked to help Lance walk on a leash, and address his issues with jumping up on people and mouthing.

But despite improving his behaviors with Alfonso, Lance was still struggling to find the right, loving home. But that would all change in January 2019.

Brendan tells us that he’d been wanting his dad to get another dog for some time. He’d grown up with two big Labrador Retrievers, and both Brendan and his dad needed a new buddy. So, Brendan began looking for the right match—and that’s when he spotted Lance on the ASPCA website. 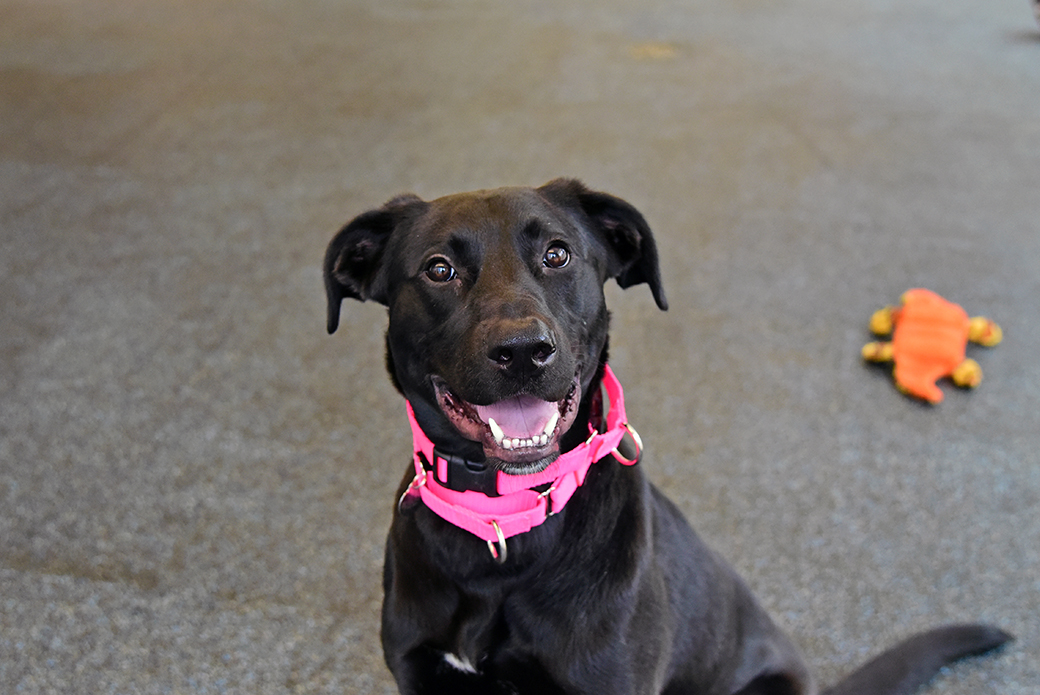 Lance’s happy, smiling face caught Brendan’s eye, he showed his dad and the pair were soon off to meet the rescue dog. Upon their first meeting, the connection was instant, though they were originally looking for a smaller dog.

“When I introduced Brad and his son to Lance, he did exactly what I expected Lance to do: he jumped up as high as he could to give Brad a kiss on his face—and he did it!” Alfonso tells us with a laugh. “Brad being so tall, I didn’t think he could do it, but Lance kissed him right on the cheek.”

But the jumping didn’t deter Brad one bit.

“It was love at first sight,” Brad says.

Witnessing their meeting, Alfonso felt confident that Brad, who stands well over six-feet-tall, was “the one” for this large pup.

Brad’s experience with large dogs and his immediate love for Lance (which was already growing) assured him that he and Brendan would be the perfect family to help Lance continue to grow and mature. They made the adoption official and never looked back—Lance had finally gone home for good. 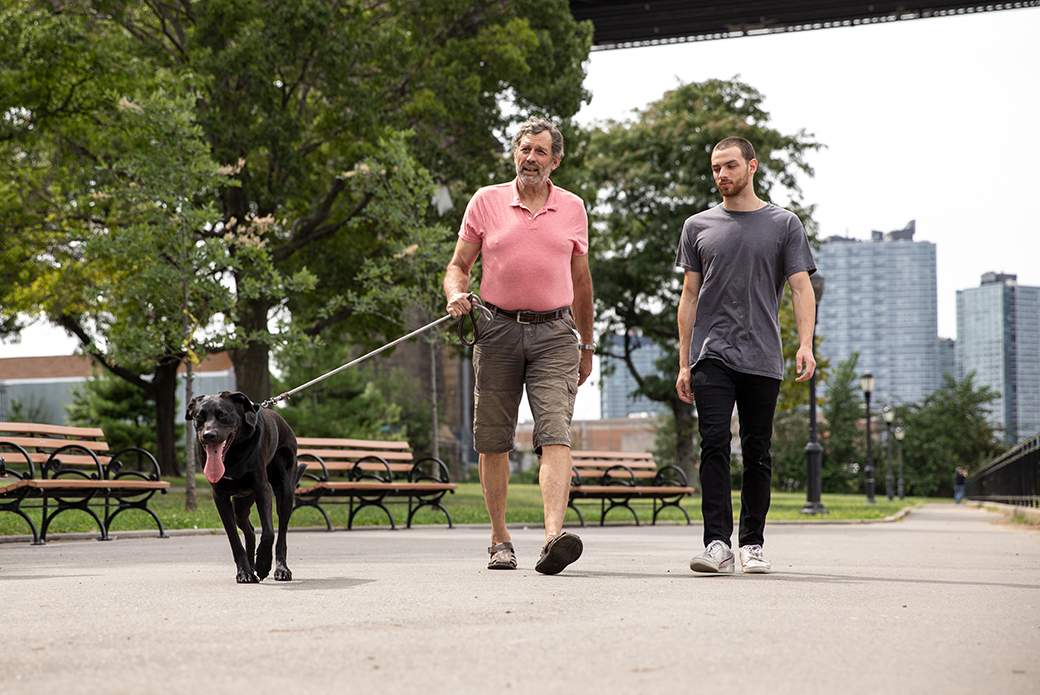 “When we took him home it was kind of this immediate thing; you feel it,” says Brendan. “You feel like you’ve met this dog before.”

A Home at Last

After going home with Brad and Brendan, Lance took some time to adjust. According to Brendan, Lance was rambunctious and curious when he first arrived and displayed “typical” puppy behaviors. 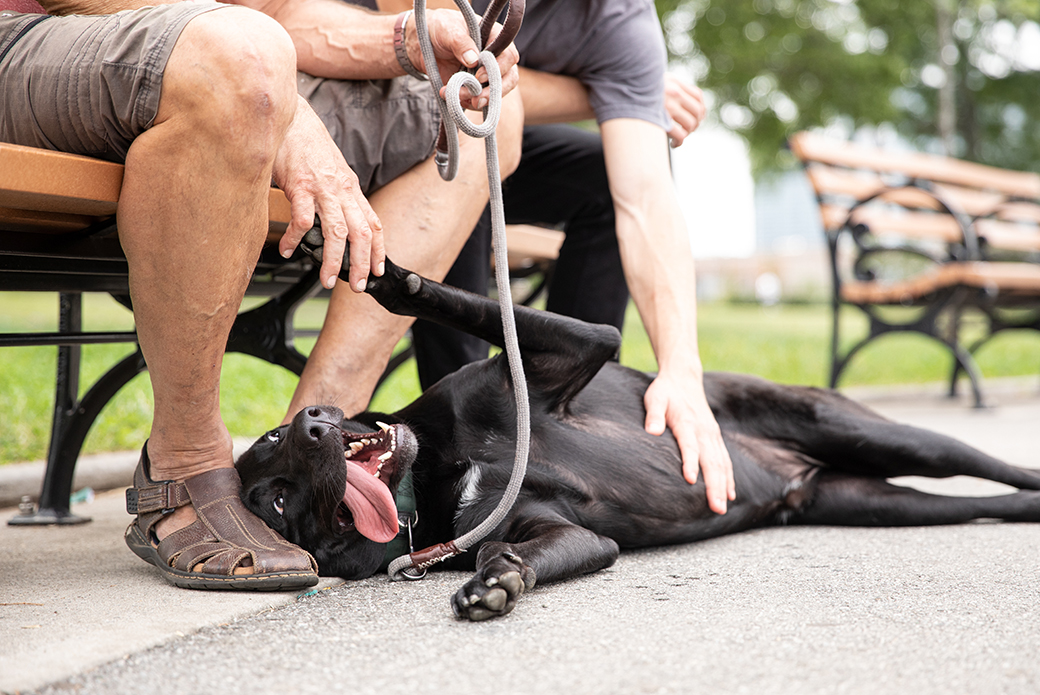 “You knew he was worried about whether or not this was his permanent home,” Brad says. “So, he was a little antsy, he was very nervous. He’d go to the door often, but it was apparent that he was going to be very easy to train because he would listen. But it took him a little while to realize that he was in a loving, caring home.”

But as Brad continued to work with him, Lance soon began to feel like he was truly at home—and his behaviors continued to improve, too! Lance is truly a member of the family now, and it’s heartwarming to see him wrestling with Brendan, and playing tug-o-war with his best buddy Brad. It seems the family couldn’t be happier.

“His personality is unique, very expressive,” says Brendan, who adds that Lance is now very comfortable letting them know when he wants or needs things and thinks of Lance like a little brother. “It’s a really gratifying feeling to just have that kind of companionship with a dog like that.”

“There isn’t anything I don’t love about Lance,” Brad says. “He is one of your all-time great dogs. He’s a person’s best friend, truly. And the ASPCA did a great job with him.”

Lance is a social butterfly now, and a gentle giant with the family’s two cats. He spends his days getting plenty of exercise with Brad and enjoying time with his human brother Brendan.

“It warms my heart. It really feels good to see a dog successfully in a home after coming from a shelter,” says Alfonso. “Especially one who had behaviors that may be concerning and was returned four times. It’s a great success story.”

Lance’s story speaks to that of so many shelter dogs, some who may have to wait even longer to find loving homes. People pass by shelter dogs every day, hoping to adopt with a specific image in mind, or maybe they think “there’s a reason that dog is in a shelter.”

“It’s important to remember that when you come to a shelter to keep an open mind about these dogs and look at them for who they are when you meet them, as opposed to what they look like behind a kennel door,” Alfonso tells us.

Without adopters coming in with an open mind, stories like Lance’s might not be possible. Every shelter dog deserves a chance to be seen for who they truly want to be—beloved pets. It just takes people like you to help make these happy endings possible.

When asked what advice he would give potential adopters, Brad says that patience and structure are key—and of course lots and lots of love. 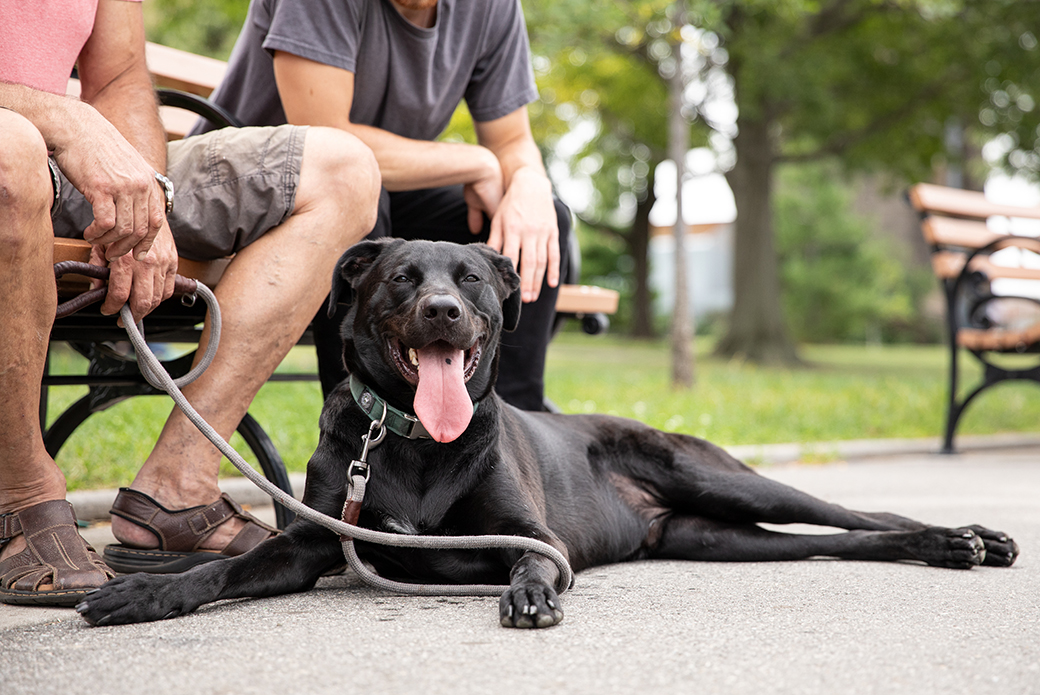 To help make more happy endings possible, visit your local shelter or rescue today and find out how you can make a difference in a shelter dog’s life.

The dog swallowed 43 sock in the stomach
LWD Adoptable Dog of the Day: Adorable Isabella Wants To Wink At You Forever!
Chinese Youth Obsessed With Sniffing Cats
ADORABLE: She Found the Washing Machine!
Lovely Lilla’s Been Waiting A YEAR For Her Forever Home. Bring Her Home For Her Next Birthday!
Senior Dog, Long Neglected, Flown To Find Forever Home
Barbra Streisand’s Beloved Dog, Samantha, Lives On … Via Her Clones
Cat Sitter in Receipt of Detailed Biographies from Owner
Why You Should Never Let Your Dog Eat “Grass” in the Water
The Best Tips for Keeping Your Dogs and Cats Safe and Stress-Free This 4th of July
BRITISH CROONER SAM SMITH CUDDLES STRANGER’S DOG IN DENVER
CAT BEHAVIOR: EARLY MORNING WAKE-UP CALL
Seven-Year-Old Georgia Boy Honored with the 2018 ASPCA Kid of the Year Award
ASPCA Spay/Neuter Alliance Works with Local Partners to Curb Pet Overpopulation
You Can Join Team Lucy and Honey Nut Cheerios to Support the ASPCA!
A New York City Retirement Home for Eustace

Uncovering the Facts: Myths on Vitamins and Weight Loss Supplements

Animal Businesses Must Be PREPARED for Major Disasters—Take Action!

Dog Care Before, During and After Birth

dogcat Jan 29, 2018 0
We hear from readers looking for help with CRF issues all the time. This is part one of a three part series from…

How to Care for Kittens

dogcat Sep 14, 2017 0
What is the IQ Option, how to register and open account IQ Option How To Play IQ Option To Achieve Greatest…

Basic operations with the interface of the IQ Option trading platform