Meet the Cat-Fox, an Oddball Feline Roaming Around a French Island

A bizarre-looking cat that roams the remote forests of the French island of Corsica may be a new species, according to local news reports. 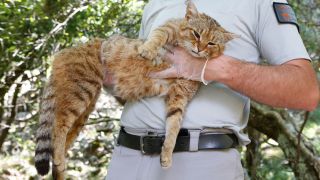 A French Forest and Hunting Office employee holds up a “cat-fox” thought to be a new feline species.
(Image: © Pascal Pochard-Casabianca/AFP/Getty)

These felines are known to locals as “cat-foxes,” and wildlife rangers in Corsica think that they might be a new, undocumented species, according to the Agence France-Presse (AFP).

These cat-foxes earned their name because of their size (slightly larger than an average domestic cat) and their tail decorations — most of them have two to four rings on their tails that end in a black tip. The cats are about 35 inches (90 centimeters) long from head to tail; they have wide ears, short whiskers and dog-like teeth, according to the AFP. [The 10 Strangest Animal Discoveries]

Researchers at the National Hunting and Wildlife Office in Corsica have been examining these cats for over a decade. Back in 2012, they examined fur left behind when the cat-foxes rubbed their bodies on a stick that had been coated with an attractive scent. When the researchers examined the DNA from that fur, they found these cat-foxes weren’t related to any known species around the world, but their DNA was similar to that of the African forest cat (Felis silvestris lybica).

Four years later, they captured the first cat-fox for examination and have since captured, examined and released 12 out of 16 individuals seen on the island. The researchers placed GPS collars on some of those cat-foxes, so they can follow the animals’ meanderings on the island.

The researchers found the feline’s main predator is the golden eagle; they hypothesize that the animal might have been brought to the remote island by farmers in 6500 B.C., according to the AFP. But there’s still much unknown about the cat-fox — and the researchers hope that the animal will be recognized as a new species and protected in the upcoming years.

Cats in Australia Kill Over 2 Billion Wild Animals Each Year

Senior Dogs: Proper Care And What To Expect

What to Look For in a Dog Bed

Why do cats purr? A Purr-fect Question

THE COLOR OF YOUR CAT – IT’S ALL IN THE GENETICS

dogcat May 25, 2017 0
What is the IQ Option, how to register and open account IQ Option How To Play IQ Option To Achieve Greatest Profits…

Be Careful When Transacting Binary Options With IQ Option

Join a Binary Option Course Should not It?